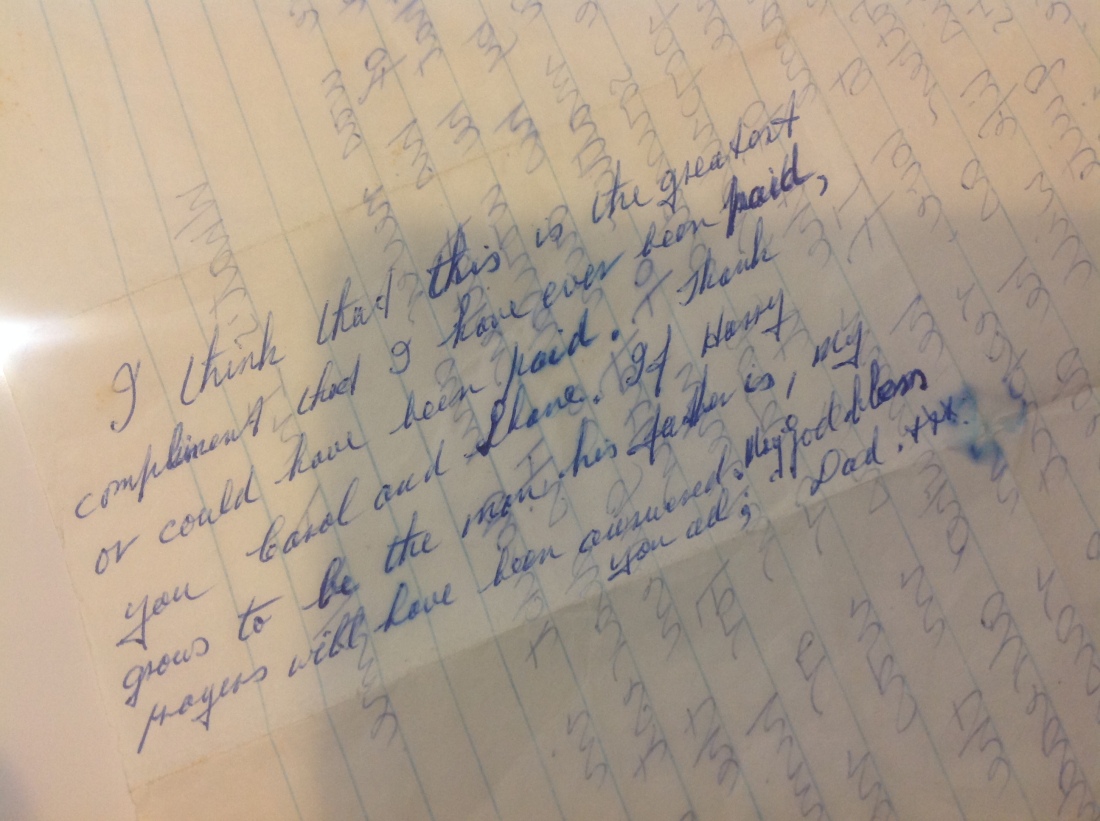 Recently I have been bestowed the most treasured gift that I could ever wish for – words.  I write because I love words, love writing with them, reading them, making up stories in my head with them, thinking about them but most of all I love receiving them. Especially when they are completely unexpected – what a true gift!

I received the unanticipated treasure from my husband’s Dad, Henry Alexander Caughey (always known and adored as Harry) who sadly passed to heaven on the first day of February, 2017.  Over thirty-five years I have written letters to my family, my husband’s family and dear friends.  Long before email and of course text message, I actually used to handwrite letters and cards.

My surprise was not only that Harry had held on to all or some of the letters, it was the magical experience of discovering that he had written a message on one of my letters, long stored in his beautiful wooden writing desk to be discovered after his passing.  The sentiment was simply beautiful.

I wanted to share a letter I sent to Harry when he was in his final year.  It was not handwritten as it took a very long time to draft, and many tears as I knew I was writing my final letter to Harry and deeply thinking of my own sweet Dad who had passed six years previous.

There have been important men in my life, my fabulous brothers, relatives by family and marriage, a few colleagues and a few select number of men I would name as friends.  Only four men, the four most impactful and dearest of men to me would I say that the term ‘important’ does not near enough convey the place in my heart and life that they hold.  They are my father Alex, my husband Shane, my son Harry and you, Harry.

My father held himself to the highest standard of human integrity and honesty that is possible.  He came from the poorest of backgrounds and yet money meant nothing to my father except in the sense of its essential nature to support his family.  He was beyond generous but never a fool.  His word was a given – always.  I am only beginning to understand how much of who he was as a man, husband and father was because of the fabric of his heritage.  I am very proud to be his daughter.

It would take pages and pages to tell you of the impact of Shane on my life.  There has not been a single day I have doubted his love, integrity and commitment.  A deeply private man who demonstrates his love of me and our children to his very core everyday in a thousand ways.  He is a clever man who has achieved a great deal, but only I can tell you Harry – he is a great man who has never wavered from being the finest husband and father that you could ever want of him.

My Harry, a man I know – but in many ways the boy of my heart and because I had just one son – I can freely love him as my boy, my best boy, my favourite boy and can never think of him without smiling and feeling that physical warming of my heart.  He is outstanding and for me packages up such good character with much of it coming from Alex and Shane and you.

Now Harry – you.  I always think of you with love, gratitude and thankfulness.  I am thankful for the man you produced in Shane.  There are too many attributes to name (even following AFL…it gives him such pleasure – ‘most’ of the time).

You showed him how to be a man of character and purpose, with strength of will, impeccable morals, unflinching loyalty and worthy of trust.  He got it from you – thank you so dearly.

He did however, inherit a few other traits also – lost wallets, misplaced glasses, missing car keys, lateness (usually doing a good deed somewhere) – thanks for that too!

Harry – you welcomed me to your family without judgement and with an open heart – thank you.  You never interfered, but you were always willing to give honest advice when asked – thank you.  You are great fun and the best company.  I have seen you bear the weight of immense popularity at times but you always managed to spread yourself evenly somehow.  Thank you.

I am truly blessed to have such heroes of men to be in the most pivotal of roles in my life.  I wanted to put down some words to share with you – to show you my thankfulness for your loving part in my life.  To thank you for Shane and for my Harry.  You and my Dad are very similar in many ways and this is the biggest compliment I can pay you Harry.

Harry left me a message on a letter I wrote to him about the naming of our son – Henry Alexander Caughey born in March, 1992 and named after his grandfather (Poppy). Henry was not a popular name at the time and Harry was not the ‘hot’ name that it is today.  There had been a naming tradition in the family which had slipped in this generation so that when my husband told me that his deepest wish would be to name his son after his father, in my heart there simply was no decision to make.  Honestly, I too was not keen on the name ‘Henry’ – Jack, would have been my choice and when I was pregnant with number three I felt for sure I would soon be out and about with Harry and Jack, the Caughey boys.  My little family colluded and convinced me of a collie pup they were already referring to as Jack.  By the way, our third was a girl, confirmed early on by scan although I was convinced it was incorrect and I had a little ‘Jack’.  Though she is as beautiful and feminine looking as her big sister – she hated ballet and piano, could beat the boys at soccer and barreled through childhood never far from her brother.

Those words, that little message are a magnificent gift and legacy that I shall pass on to my Harry.  I too shall write on the letter and keep it safe for him for when the time comes. Hopefully, he will be a much older man with his own growing family and will more deeply cherish its significance.

This inspires me to remember to send more words, deeply loving thoughts to be shared.

It has never been quicker or easier to send sweet words – have you ever had beautiful words come to you in an unforeseen manner and will you leave words as treasures, gifts and legacy?

Carol has recently retired from teaching having ventured through chalkboards, overhead projectors, whiteboards and smart boards! She holds a Bachelor of Education and a Masters degree in Guidance and Counseling. Carol has taught in primary and secondary schools in Australia and the US. She was an adjunct professor at Chaminade University in Hawaii and a tutor at the University of Canberra in Australia. Her passion is literacy and she is a volunteer tutor for adult literacy and children at risk. Writing is the 'love' of her life along with her 3 kids, 1 rather nice husband and a spectacular but naughty border collie pup. She lives on the Sunshine Coast in Queensland, Australia. View all posts by Carol Ann